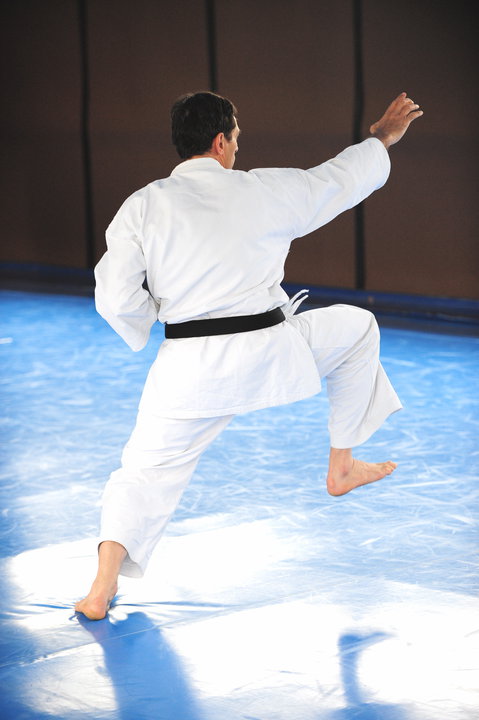 In March 1973, after 7 years of ballet dancing followed by 2 seasons of rugby, Richard Hiegel, who was then 15 years old, encouraged by his brother Philippe, begins karate in Gournay-sur-Marne, with Guy Fosse, then Youssef Ouazène, students of Jean Caujolle (former student of Ohshima Sensei, and most likely one of the very best practitioners during the early days of karate in France),

1979 : gets his black belt from French Karate Federation (FFK)

1984: gets the nidan (2nd degree of black belt) by Ohshima Sensei in Vichy,

1994 to 2006: elected President of France Shotokan, succeeding to Stéphane Audoin-Rouzeau

1997: gets his yodan (4th degree of black belt) by Ohshima Sensei in Vancouver

2003: organizes with Jean-Louis Morel (FFK side) under Francis Didier’s scrutiny (President of FFK) France Shotokan’s come back into the French Karate Federation :
– 183 FSK members (plus 15 “on the green carpet”) obtain the equivalency of their Shotokan Ohshima Karate black belt degree in the Federation ranking system,
– one DIF (Diplôme d’Instructeur Fédéral = Federal Authorization of Teaching Karate) is awarded to each dojo leader.

2004: gets his godan (5th degree of black belt) by Ohshima Sensei in Mulhouse, during FSK 40th Anniversary (with his very good friend Jean-Louis Véran),

2005: gets his 5th dan (degree of black belt) by FFK in National Institute of Sports (INSEP), Vincennes

2012: nominated by Alain Gabrielli (FSK Shihan = Head of Ohshima Sensei’s French Organization) to lead the annual session for over-fifty-years-old members, which he leads since, except the one in 2014 led by Michel Coutant.
Group has grown from 70 members to more than 85 (90% being black belts), including 20 godans.

2017: upon recommendation by President Georges Maniey, Head of Ligue de Karaté du Val-de-Marne (Karate League of Val-de-Marne county), awarded “Youth and Sports Silver Medal” (delivered by French Minister of Youth and Sports) for his volunteer and associative dedication over the years.